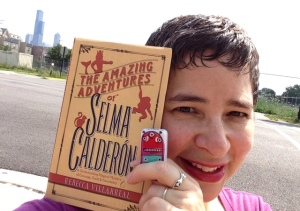 It’s so hard, but I will try to focus on one tool that stuck with me from last week. I had a life-changing experience at The World Domination Summit (WDS). It’s taking every fiber of my being to share the energy in bits, because there was so much to take home for my mind, heart and soul.

WDS is the brainchild of author Chris Guillebeau. I can’t wait for his latest book, The Happiness of Pursuit, to to be released on September 9. Over the course of ten years, Chris has traveled to every single country in the world. After 9/11, he wanted to “do something.” So in time, he launched the World Domination Summit. He invited people to Portland to answer the question: “How do you live a remarkable life in a conventional world?” With the core values of adventure, service and community, I joined 3,000 people at WDS, now in its fourth year. Chris doesn’t take a salary for the event and though there are a few staff members, the summit wouldn’t exist without the corps of amazing volunteers who truly wanted to be there. I’ve never felt so much love and commitment to service in one room.

I will tell you that as a human vessel, I was moved more than I’ve ever been moved in my life. Don’t I look like I’m about to explode with joy? Dominate the world? I intentionally took plenty of time alone when not in sessions to come down off of the excitement and soul-moving stories and insights. If you like TED Talks, this was like TED on steroids while being surrounded by some of the most kind and interesting people from around the world. I met scientists, software designers, day traders, writers, artists, musicians and world leaders. And when I say world leaders, I mean ordinary people taking small and big steps every day to change the world.

So here’s my one thing I’ll share today: Gary Hirsh launched Bot Joy to help people feel brave. One eleven-year-old girl with diabetes used her Brave Bot to inject her arm with insulin before every meal. She’s gone through several bots because she rubs them again and again, wearing the paint off. The impetus for this project is based upon Gary’s childhood memories of waking up with nightmares of monsters. His dad encouraged him to draw and name the monsters during their 3:00am kitchen table sessions. Years later, Brave Bots were born. At WDS, Gary asked, “What’s one brave thing you’ve done?” Stop and think about it. Brave things can come in small packages. Your answers might surprise you. He also asked,

What’s one brave thing you want to do, but haven’t?”

One of my favorite answers (from Gary’s friend) was:

Okay folks, so here’s my brave thing I want to do but haven’t:

I am taking some time off from working on my novel, The Amazing Adventures of Selma Calderón, A Globetrotting Magical Mystery of Courage, Food and Friendship. I decided to move publication to 2015. And for the very driven Rebecca, this takes courage. I am choosing to slow down so I can stay healthy while working and enjoying life with family and friends. This is a brave step in staying whole.

Here’s the other brave part: at the top of this post, I’m hanging with my bot. And for the first time, I’ve unveiled the cover of my novel just for you, dear readers! Isn’t it beautiful? I love, love, love it! Alvaro Villanueva of Bookish Design created it.

This makes it real, folks. As if it wasn’t already.

So what’s one brave thing you want to do, but haven’t?

To see my fellow WDSers activating their bots, click here.

To steal Gary’s idea and make your own bot (really, he wants to you to), click here.

Sending you love and bravery, every single day from me and my bot, Olympia. (I just named her that.)

Welcome to your home of abundant inspiration! I'm Rebecca Villarreal, author of The Amazing Adventures of Selma Calderón, A Globetrotting Magical Mystery of Courage, Food & Friendship. (Available everywhere.) I'm also a poet, artist and a source of light!

I'm glad you came to visit. Together we can celebrate life, food and art. Check out all things book related on my website at http://rebeccavillarreal.com. Thank you for finding me!

Please enter your email below if you want to get the gift of inspiration about twice a month. You'll get food, art, poetry, music, always something to make you think and hopefully move your spirit. Check your email box for a confirmation.

You can find me on twitter at @RebeccaVWriter or email me at rebeccainspiresnow@gmail.com with any questions.

So nice to meet you!